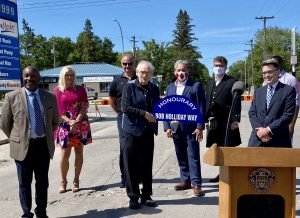 On July 22, it was such an honour to join in the honourary renaming ceremony of a section of Sadler Avenue to ‘Bob Holliday Way’. Many people know Bob ‘Doc’ Holliday given his involvement in many community initiatives.

Bob started out as a reporter for the St. Vital Lance, before moving on to the Winnipeg Tribune and the Winnipeg Sun. His passion for documenting events led him to become involved with the St. Vital Historical Society later in life, where he helped create the St. Vital Museum located in the old St. Vital fire hall and police station at the junction of St. Mary’s and St. Anne’s roads.

I’ve had the privilege to know Bob for many decades. Early in my boxing career, he was a ring announcer for local boxing matches. He was always willing to give advice, which was always easier for him to say than for me to do!

Over the years, we often met at the Red Top and had many wide-ranging conversations. Bob always knew what was going on in the community. In fact, he knew early on my intention to run for St. Boniface City Councillor in 1995. Since then, we’ve worked on a number of projects together.

In addition to his extensive work in historical preservation, Bob has also spent a lot of time working with minor league hockey in Manitoba, both as a sports reporter and an official. He continues writing a monthly column for The Lance and also publishes the annual Manitoba Police Association magazine.

I’ve always believed that street names and community amenity names need to reflect the history of the community in which they are located. I can’t think of a more deserving recipient than Bob Holliday. Thank you to St. Vital Councillor Brian Mayes and St. Norbert – Seine River Councillor and Deputy Mayor Markus Chambers for having sponsored this street naming and inviting me to attend. I was very proud to have been a part of it.

Congratulations Bob and thank you for your enormous contributions to the St. Vital community!